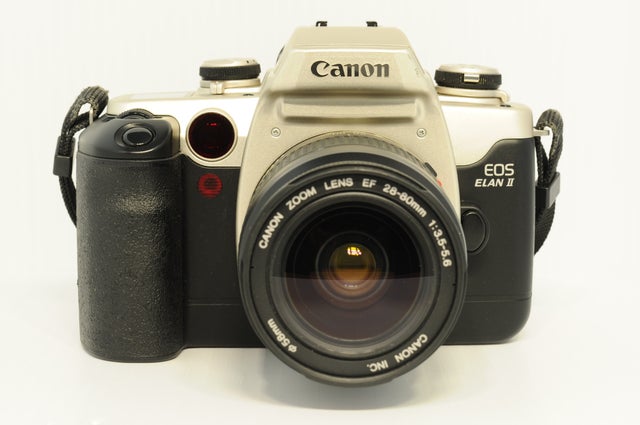 The 21st does not have a monopoly on "retro". The EOS Elan II serves as Exhibit A of the nostalgia bug that bit the Japanese SLR industry in the mid-'90s. The proliferation of control dials and what we now call "panda" finishes was an attempt to negate the swelling backlash among enthusiast photogs of the time against the swathes of black polycarbonate that had come to typify the industry. Canon's blend of champagne-tinted aluminum accents and a melding of late-70's-style control dials and levers with their modern button + dial interface proved to be quite successful. The Elan II and its Eye-Control-equipped sibling the Elan IIE (aka EOS 55 in Asia or EOS 50E in Europe) slotted in between the Rebels and Canons more advanced models and were well-specified in their category: three AF points, 1/4000 - 30 sec. shutter speeds, the full PASM exposure mode range along with a smattering of consumer-aimed presets, three metering modes, auto-bracketing, 2.5 fps (frames per second) film advance, and 11 Custom Functions. The Elan II was one of the last AF SLRs to feature an unobtrusive near-infrared AF-aid light, which is preferable to the bright, annoying lights that were rapidly being adopted by the mid-'90s as manufacturers were cutting costs. It was also the lowest-priced Canon to use a glass pentaprism for the viewfinder, making for a brighter viewfinder than the pentamirror-packing Rebels. It was also one of the quietest SLRs on the market, and still is very discreet, especially with USM lenses. This particular copy has seen very little use, and has only minor finish wear on the front of the prism housing. The viewfinder is clean and clear. Typical of most EOS film SLRs, the Elan II uses a 2CR5 lithium battery, which is included with the camera. The basic EF 28-80/3.5-5.6 lens is as plasticky as it gets, but is good optically and only weighs 200 grams (7 oz). Combined weight is 795 grams (28 oz). Please feel free to contact us with any questions.